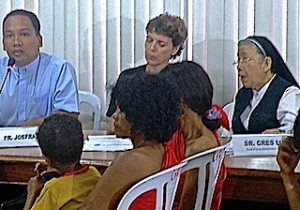 Task Force Detainees of the Philippines (TFDP) has called for the immediate release of the two indigenous Agta women that a Department of Justice resolution said were illegally arrested, immediate implementation justice Secretary Leila De Lima’s order for a reinvestigation of the arrest, detention and alleged psychological torture of the women living in the northern Philippine Prelature of Infanta.

Justice Secretary Leila de Lima in January said the arrest of Marites Marquez, 43, and her cousin, Rosario Loreto, 37, was illegal because of procedural lapses, including the absence of a warrant.

Policemen and soldiers arrested Marquez and Loreto of the Agta community working with the prelature’s apostolate to indigenous people in the Sierra Madre mountains in Quezon province last September, shortly after the New People’s Army of the Communist Party of the Philippines abducted a retired army soldier in the province.

A copy of the DOJ order given to the Inquirer by Fr. Pete Montallana, Infanta prelature’s apostolate coordinator showed De Lima ordered on Jan. 7  the “complete record” of the arrest of the two Agta women “returned to the office of origin for the conduct of a reinvestigation in light of the illegality of the arrests of the respondents