(Vatican Radio) Pope Francis issued a letter for the Year of Consecrated Life, which will start throughout the universal Church on the first Sunday of Advent, 30 November. The observance will end on the Feast of the Presentation of Jesus in the Temple, 2 February 2016.

In his message, the Pope underlined the aims of the Year of Consecrated Life, namely to look to the past with gratitude, to live the present with passion and to embrace the future with hope.

Listen to the report by Laura Ieraci:

1. Institutes of consecrated life will look to the past with gratitude…

2.  To live the present with passion… 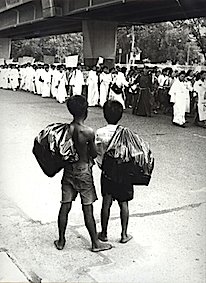 3. To embrace the future with hope

II.        EXPECTATIONS FOR THE YEAR OF CONSECRATED LIFE

1.        We are called to know and show that God is able to fill our hearts to the brim with happiness; that we need not seek our happiness elsewhere; that the authentic fraternity found in our communities increases our joy; and that our total self-giving in service to the Church, to families and young people, to the elderly and the poor, brings us life-long personal fulfillment.

2.         I am counting on you “to wake up the world”, since the distinctive sign of consecrated life is prophecy.

4.         I also expect from you what I have asked all the members of the Church: to come out of yourselves and go forth to the existential peripheries.  “Go into all the world”…

5.         I expect that each form of consecrated life will question what it is that God and people today are asking of them. 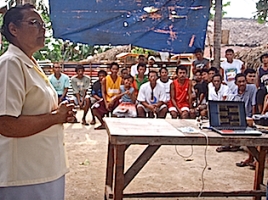 A Catholic cinematographer’s unscreened trail of service and travail

“My faith is my life and I will never betray it,” said Andrew Jayamanne in a message to friends soon after leaving Sri Lanka over two yeas ago. It clarified the truth about media distortion of an interview he had given before joining his sons working in Italy.

Witness to truth was the consistent criteria in the life and work of this Catholic cinematographer and media guru, who passed away recently in Italy, at age 71. After colleagues, pupils and fans farewelled him at Colombo’s National Art Gallery, his remains were interred in his native village on Sept. 7.

Though values of truth and transparency are not too popular in today’s media world, the late Jayamanne had assimilated them as part of faith life. Heir to a value heritage so eminently evidenced by the life of his granduncle, the late Cardinal Thomas Cooray, his spirituality was nurtured in Periyamulla parish. His father, Vincent Jayamanne, led the parish as lifelong Church warden. Beatrice, his gracious mother, was a model of Catholic motherhood, and their home was a stoic school for life.

Jayamanne had his early education at the village Catholic School and Colombo’s Minor Seminary. He began honing cinematic skills under the guidance of another great son of Periyamulla, Father Ignatius Perera, founder director of Radio Electronics, Colombo. The priest’s home-grown holistic spirituality had made him equally at ease in conducting the Vatican choir as in solving technical problems of then Radio Ceylon. And Jayamanne was blessed with the privilege of assimilating the techno-artistic versatility and simplicity of that many-talented genius.

As young Jayamanne graduated from cameraman, to scriptwriter, filmcritic cinedirector and media guru, his Christian simplicity and genuine humanity outshone all talents and attributes. Even as a top cinematographer, he was equally available to high-brow professionals as to no-brow amateurs.

Being very much a people person, he drew no distinction between classical cinema and popular cinema. His professionalism echoed what Pope Francis said recently about film culture. Antonio Spadoro’s book “Pope Francis” summed up the preferred papal view of media in these words: “The classic work is the one that everyone can somehow feel as their own, not something that belongs to a small group of refined connoisseurs,” That indeed was part of the media values Jayamanne sought to cultivate through the pioneer media training courses he ran for OCIC. His teaching skills came to be much valued throughout the country as well as beyond.

From the 1970s onward, his career peaked over three decades. With some 30 movies and an equal number of teledramas to his credit, Jayamanne’s accolades included a dozen media awards. But accolades never went into his head, and his heart never swayed from his steadfast value base. His reluctance to trade principles for opportunism, however, gradually undermined his career. Bowed but not broken, he found much rewarding experience as a media guru until he decided to take a break away from the local media minefield.

Jayamanne’s decision to leave Sri Lanka did cause a major flutter in local filmdom as well as in political circles. A sense of guilt prompted attempts at last-minute remedial measures. But they were too little too late. The cancer of professional undercutting and opportunism had already begun to erode his spirit. His final ailment was only its physical manifestation. However, the million dollar question remains whether both his welfare and the training of future artistes could not have been better achieved if Church and State media agencies had continued to better harness his energies. Therein also lies the cue to this media mahatma’s unscreened saga of witness to truth.
May the Divine Artiste unravel its lessons while Andrew Jayamanne returns to the heavenly embrace of his ancestors.

Veteran Asian Church journalist Hector Welgampola from Sri Lanka has retired as Executive Editor of the former Union of Catholic Asian News (UCAN) based in Hong Kong, then Bangkok. Before UCAN, Hector headed editorial teams of newspapers in Sri Lanka. Since retiring Hector has lived in Australia with his wife, Rita. He authored the resource book Asian Church Glossary and Stylebook.