“…grassroots-level clergy of all religions should commit themselves to the role Venerable Sobhitha Thero played as mentor and guardian of the people’s conscience. The time has come to take such commitment to apocalyptic fulfillment through an apolitical mass movement…” – Hector Welgampola

2015 was a momentous year in the history of Sri Lanka. It began with a decisive presidential election followed by a significant parliamentary election. The polls led to an unlikely merging of two political teams led by President Maithripala Sirisena and Prime Minister Ranil Wickremasinghe. They were welcomed as implementers of a reform agenda pioneered by a charismatic Buddhist monk– Venerable Madoluwave Sobhitha Thero.

Soon after facilitating such triumph of people power, the king-maker withdrew to his temple, thus providing space and time for the new leaders to implement the program of Good Governance championed by him. However, like émigré who forgot nothing and learned nothing from the French Revolution, many political vermin of all parties lost no time in an eager rush for perks and privileges. While the frustrated prelate was contemplating the next move of his prophetic mission, he fell ill and died, a virtual white martyr in a campaign for social justice.

The new rulers hastened to give a State funeral to the venerable thero whose untimely death is mourned by the entire Nation. Even the Catholic Church held a Nov. 23 memorial in his honor. Eulogizing the prelate’s prophetic self-giving, his close collaborator Father Reid Shelton Fernando reportedly compared the prelate to Prophet Jeremiah. It was an appeal for further pursuit of the prelate’s prophetic commitment of witness to social justice. No doubt a tall order for puny politicians!

The politically dissipated new rulers too have rushed in to recommit to Venerable Sobhitha’s agenda, though emphasis seems to be more on constitutional reform and less on wiping out the endemic cancer of corruption. The Western-style perception of reform as political tinkering has been deep rooted in the psyche of the country’s political establishment. Unfortunately, the momentary dazzle of such political tinsel has often anesthetized the public and distracted their yearning for a moral ethic in politics: a weakness that has riddled the country for centuries.

By coincidence, this year also marks the bicentenary of the political cataclysm of 1815, which has been innocuously recorded as the year when the British completed their capture of then Ceylon. Until recent times, little was spoken of the local political establishment’s connivance in that transfer of power to the colonizers. Much less was highlighted about the polity’s spontaneous protest symbolized by a Buddhist monk courageous enough to rise against the aristocracy’s surrender of a Nation’s self-respect. History records how he pulled down the British flag and re-hoisted the flag of the country’s last independent kingdom.

Venerable Wariyapola Sumangala Thero’s action on behalf of his Nation was the symbolic launch of a people’s political protest that kept struggling in varied forms to survive for over a century. His 1815 protest surfaced and resurfaced in the form of popular riots, rebellions and uprisings in 1818, 1848, 1912 onward. Ultimately, such protests in the public square were hijacked by new rich urban elite seeking respectability of a tame path of constitutional reform to the delight of their colonial masters.

That contrived process climaxed in the British-style dominion status leading to political independence in 1947. Just as the Nation’s cause of selfhood was nobly pioneered by generations of Buddhist clergy, its blossoming into a popular movement was thwarted by the money-culture- addicted business elite striving to emasculate it into a tool of economic dominance and political control. And from the early years of political independence, the parliamentary system became a forum to entrench family power, and share political spoils based on subtle racist and casteist criteria. That led in no small measure to the uprisings of the post-independence period. We do not need to go down that path again.

This bi-centenary year of the 1815 political upheaval has begun to be marked by still newer waves of constitutional pyrotechnics to divert the Nation’s need for moral reawakening and elimination of corruption at all levels. Political lobbies have proved themselves impotent in fulfilling that momentum perceived by Sobhitha Thero as a prophetic mission. It was part of a grassroots-level spiritual mission nurtured by generations of non-hierarchical Buddhist clergy including more recent plebian-allied prelates such as Venerable Heenatiyana Dhammaloka Thero, Venerable Yakkaduwe Pragnarama Thero and Venerable Siri Seevli Thero.

If that mission of apolitical social engagement is not to be frittered away, grassroots-level clergy of all religions should commit themselves to the role Venerable Sobhitha Thero played as mentor and guardian of the people’s conscience. The time has come to take such commitment to apocalyptic fulfillment through an apolitical mass movement.

Veteran Asian Church journalist Hector Welgampola from Sri Lanka has retired as Executive Editor of the former Union of Catholic Asian News (UCAN) based in Hong Kong, then Bangkok. Before UCAN, Hector headed editorial teams of newspapers in Sri Lanka. Since retiring Hector has lived in Australia with his wife, Rita. He authored the resource book Asian Church Glossary and Stylebook.

Sri Lankan president, Mahinda Rajapaksa conceded defeat in this morning’s polls ending his 10-year rule, which he tried to extend by removing the constitutional term limit for the presidency. He called elections two years ahead of schedule and was reportedly widely predicted to win before his party mate and health minister defected from the party to run against him.

Around the time Rajapaksa conceded defeat, the Department of Elections said it had counted 56.5 percent of the votes in favor of Sirisena while Rajapaksa garnered 42 percent.

Analysts say aside from winning votes of Tamil and Muslim electors in the countryside, Sirisena, a Sinhala Buddhist, also split votes of southern Sinhalese electors that traditionally backed Rajapaksa who led the government when it defeated Tamil militants in 2009.

Recently, however, Rajapaksa, 69, has been criticized for his authoritarian leadership and appointing family members to key positions in government.

Sirisena raised these issues in his campaign and promised to fight corruption and bring constitutional reforms to weaken the power of the presidency. His platform of government or “Manifesto”  promises he would work for genuine democracy by amending the constitution, review economic and development ventures and policies, promote a moral society, food security and sustainable agriculture, provide healthcare for all Sri Lankans, reform education, among others.

The elections were conducted just 5 days before Pope Francis’ pastoral visit to Sri Lanka to canonize its first saint and pray with pilgrims at the Marian Shrine in Madhu in a northern district heavily affected by the civil war.

Cardinal Malcolm Ranjith had said the candidates pledged at a meeting with bishops they would work for a “peaceful atmosphere” during Pope Francis’ visit to their country Jan. 13-15. Since Rajapaksa invited the pope for a state visit, the defeated president “gave his personal assurance that … he will not allow anything untoward to happen during the Papal Visit,” Cardinal Ranjith added in an interview in mid-December. 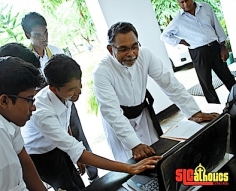 Manila – Catholic in Asia spoke briefly on the phone to Colombo with Father Cyril Gamini Fernando, National Director of Catholic Social Communication in Sri Lanka on Friday, Dec. 5, to get the local Church’s perspective of concerns raised by Catholics who are pushing for the postponement of Pope Francis’ January 2015 visit to their country.

Here’s what Father Fernando had to say: [excerpts]

Catholic In Asia : What was the outcome of the meetings with the Vatican papal visit team that went there after the schedule of early elections next year was announced ?

Father Cyril Gamini Fernando: The Vatican team did not come here in connection with the elections. They have come here to check on the preparations for the papal visit. That is the normal thing. They do the same thing in Manila also. They arrived day before yesterday (Dec. 3) and they have left already. As of now there is no change in the schedule of papal visit events.

What is the response of Sri Lanka Church officials to concerns of Catholics detailed in published letters and statements? What is Cardinal Ranjith’s response to these, and to “politicization” of the papal visit ?

We have requested all parties connected with these elections that they should not use these as election tools, whether  their pictures with the pope or anything showing the papal visit. So we have asked if there are already such pictures displayed outside or in online accounts, they should remove them all. We have told that to all parties.

What about anticipated violence around the time of the polls? How does the local Church see this?

Election day is on the 8th (January) we have about six days ‘til the 13th to open the ballot and count and declare the president before we will welcome the Holy Father for the visit.

What assurance can local Church organizers give for the safety of the pope and people who will be around the venue of papal visit events?

We have faith in God and we have asked the people to pray and prepare spiritually for the visit because it is primarily a spiritual event.