Retired Archbishop Leonardo Legaspi of Caceres, a member of the Dominican order who had served as president of the Catholic Bishops Conference of the Philippines, here with emcee, movie and tv actress and host Boots Anson-Roa during the Philippine Conference on New Evangelization (PCNE) at Pontifical University of Santo Tomas in Manila Oct. 17, 2013 talked about his prayers to the Lady of Penafrancia while he battles cancer. NJ Viehland Photos

Former Catholic Bishops’ Conference of the Philippines (CBCP) president and Caceres Archbishop Emeritus Leonardo Z. Legaspi of the Order of Preachers (Dominicans), 78,  passed away at 5am Aug. 8,  Feast of Saint Dominic, at University of Santo Tomas (UST) Hospital after losing his battle with cancer, CBCP News reported.

Archbishop Legaspi underwent chemotherapy after doctors found tumors in his lungs in January 2009 and said he had stage three lung cancer, the prelate had announced.

In a press conference organized by Caceres Archdiocese in the Archbishop’s residence in August 2010, the ailing archbishop reported that the tumors had disappeared. He said the Lady of Penafrancia, patroness of the Bicol region where his archdiocese lies, healed him of his tumors.

Last October, Archbishop Legaspi told thousands of participants gathered in the campus of the Dominican-run UST for the Philippine Conference on New Evangelization the story of his devotion to the Lady of Penafrancia, its impact on his life and ministry, especially in surrendering to the Lord and preparing to join his creator.

This, he said, he continued to do at UST where the prelate lived after turning over leadership of Caceres to his successor, Archbishop Rolando Tria-Tirona, in Nov. 2012.

Following announcement of his death,  colleagues in the CBCP cited among notable endeavors his leadership in Philippine Church renewal after taking over as CBCP president  the year after the 1986 “People Power” uprising that deposed the late President Ferdinand Marcos and restored democratic institutions in the country.

CBCP News quotes Novaliches Bishop Emeritus Teodoro Bacani, Jr. describing Archbishop Legaspi as “A giant among bishops – a leader with vision and integrity and with huge achievements, especially initiating and leading the Second Plenary Council of the Philippines (PCP II).”

Legaspi presided over  PCPII, a gathering of more than 470 Church leaders and members – bishops, religious, laity from Jan. 20-Feb. 17, 1991 in  San Carlos Pastoral Formation Complex in Makati, Metro Manila to study changes brought about by Vatican II, the context of Church in the Philippines and discern a path to reform and renewal.

Rest in peace and pray for us, Archbishop Legaspi. 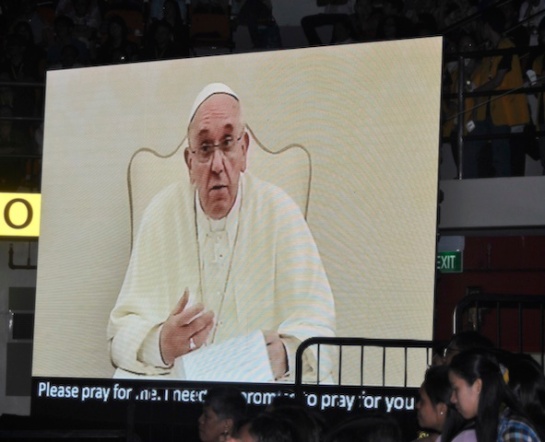 Pope Francis addressed the Philippine Conference on New Evangelization speaking publicly in English for the first time in a video message screened at the end of the closing Mass Oct. 18, 2013 at the University of Santo Tomas, Manila. NJ Viehland Photo

[Transcript of Pope Francis ‘ Video Message for the Philippine Conference on New Evangelization at the closing Mass on October 18, 2013 at the University of Santo Tomas Quadricentennial Pavilion.  -PCNE press release]

Click here for video
My dear brothers and sisters in the Lord Jesus Christ,
I greet all of you with the peace and joy of our Lord. The first Philippine Conference on the New Evangelization is our offering to the Year of Faith. For this I thank all of you: brother Bishops, the priests, religious men and women, seminarians, and the lay faithful who organize and are participating in the conference. I am happy to learn that you came to Manila from different parts of the Philippines and Asia. The Holy Spirit has actively called you.
The Church of Christ is alive. Through this conference, I hope you would experience the presence of Jesus in your lives, that you would love the Church more and that you would share the Gospel to other people with humility and joy. Don’t get tired of bringing the mercy of the Father to the poor, the sick, the abandoned the young people and the family. Bring Jesus now into the world of politics, business, arts, science, technology and social media. Let the Holy Spirit renew the creation and bring forth justice and peace in the Philippines and in the great continent of Asia that is close to my heart.
Please pray for me. I need it. I promise to pray for you especially to our mother, the blessed Virgin Mary, star of the new evangelization.
Mabuhay ang Pilipinas! Mabuhay ang Asia! Pagpalain kayo ng Diyos.
God bless you in the name of the Father, and of the Son and of the Holy Spirit.
FRANCIS
————————————-