Hundreds of people who gathered at a public square here for a rally against the death penalty lit candles and joined in singing “Heal the World” to close a historic dialogue on human rights and respect for the dignity of life.

It may have ended months of work for the first Asia Pacific dialogue on the theme “No Justice without Life.” But Mayor Benjamin Abalos Jr. and other speakers pointed out that much work remains for Filipinos to foster dialogue on the death penalty and ensure that the country’s laws do not again allow executions. 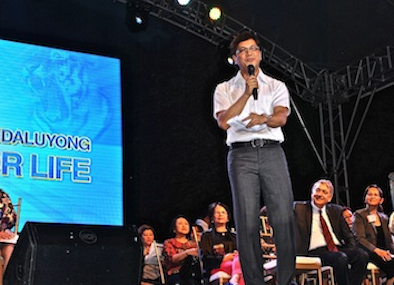 Mayor Benjamin “Benhur” Abalos, Jr of Mandaluyong on the Global Campaign Cities for Life where his city is member at the anti death penalty rally Oct. 28, 2014 in Greenfields Square / NJ Viehland Photos 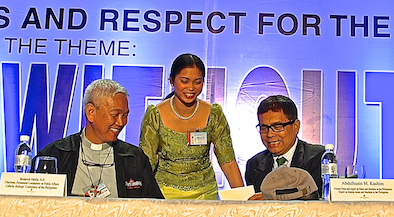 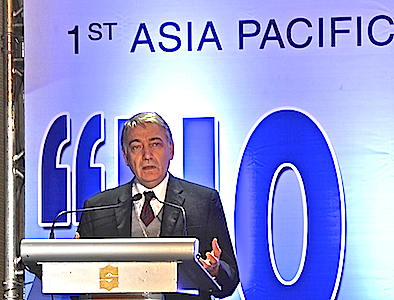 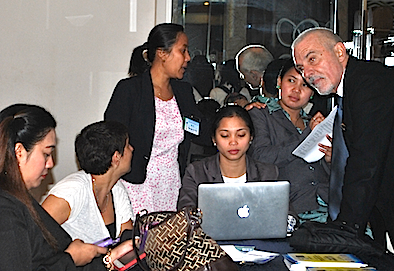 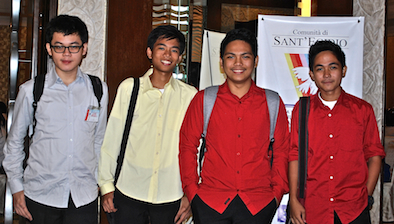 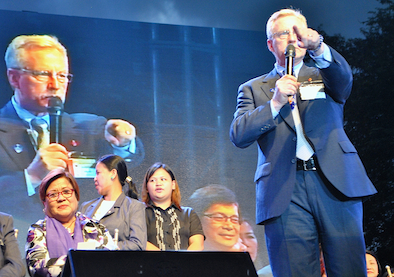 Rome-based international Christian Community of Sant’Egidio and the Philippines Department of Justice (DOJ) welcomed delegates to the October 27-28 conference on the death penalty that will be held in Mandaluyong City, east of Manila.

Philippines Justice Secretary Leila De Lima announced the “Asia-Pacific Congress on human rights, respect of human life, abolition of death penalty,”  and introduced her department’s co-organizers during a press conference conducted Oct. 23 at the DOJ in Manila as delegates arrived.

On Monday, representatives of Asian governments, activists and witnesses from Asian countries and more than 30 mayors from around the Philippines will gather  there for two days to listen to and dialogue on issues and points tackled in talks concerning human rights, respect for life, abolition of every kind of death penalty in Asia.

Leonardo Tranggono who serves in Sant’Egidio’s international affairs office told Catholic in Asia this is the first time the annual gathering launched in 2005 is being held outside Italy. Asia was selected primarily because majority of governments in the region still impose capital punishment, Tranggono said.

Tranggono and Italian Ambassador to the Philippines Massimo Roscigno thanked De Lima for accepting the invitation to host the “historic” conference and for the Philippine government’s “advocacy” for halting executions of persons.

President Gloria Arroyo approved in 2006 the law abolishing death penalty in the Philippines.

This week’s conference host, Mandaluyong City, has also declared its opposition to the death penalty, along with more than 2,000 “Cities for Life” in some 50 countries, Tranggono said.

End of Part I

Archbishop Socrates Villegas of Lingayen-Dagupan, President of the Catholic Bishops’ Conference of the Philippines addresses a press conference at the end of the 2012 CBCP plenary assembly at Pope Pius XII Catholic Center in Manila. NJ Viehland Photo

Although appalled by the spate of killings and other heinous crimes in the country, the Catholic Bishops Conference of the Philippines (CBCP) yesterday rejected calls to revive the death penalty.

Following is the full text of the bishops’ statement issued yesterday by Archbishop Socrates Villegas of Lingayen-Dagupan, CBCP President…

The Catholic Bishops’ Conference of the Philippine has been informed of attempts by advocacy groups to lobby the Legislature for the restoration of the death penalty.

The CBCP must, with full voice, express its position FOR LIFE and AGAINST DEATH. “I came that they may have life, and have it to the full.” Our posture cannot be otherwise. The Gospel we preach is a Gospel of Life, but the position we take is defensible even on non-religious grounds.

Justice DOES NOT DEMAND the death penalty. A mature sense of justice steers as far as possible from retribution in the realization that visiting on an offender the same injury he inflicted on his victim makes matters no better at all for anyone! The aim of justice is the restoration of broken relations and the ruptured social coherence that follow from crime. Executing a human person does not contribute to any of these goals of justice. Neither can it be argued that the supreme penalty is necessary to vindicate a legal order. In fact, it is a weak and retrogressive legal order that calls for the execution of offenders for its vindication!

Death penalty is cruel and inhumane in two senses.

First, the terrible anxiety and psychological distress that come on one who awaits the moment of execution constitute the cruel and inhuman punishment that most legal systems today proscribe, including the Constitution of our country. It has been rightly said that the anticipation of impending death is more terrible a torture than suffering death itself!

A most important consideration is the imperfection of our judicial system. While the CBCP has every respect for respectable judges, the fact is that the judicial system — including the process of evaluating and weighing evidence — is, like all human systems, liable to error. But the death penalty, once executed, is irreversible and no repentance or regret can ever make up for the horrible injustice of a person wrongfully executed. There is furthermore the sadder fact that some judges, betraying the dignity and nobility of their calling, allow extra-legal considerations to taint their judgments, rendering judicial disposition of cases less reliable still. Once more, we must make clear that the CBCP does not by any means intend to cast aspersions on the judiciary of our country and in fact calls on all our people to turn to the courts for the redress of grievances.

Finally, the Philippines is a State-Party of the Second Optional Protocol of the Covenant on Civil and Political Rights, and the principal obligation we assumed under this international agreement is to abolish the death penalty. We cannot and should not renege on our international obligations, especially when these are not only lawful but moral. Pacta sunt servanda is not only a legal principle. It is key ethical imperative as well!