Francisco F. Claver, S.J. (20 January 1926 – 1 July 2010) was a Filipino Jesuit priest, appointed and consecrated first bishop of the Roman Catholic Diocese of Malaybalay in the Philippines.  He was the first member of the Igorot ethnic groups in the northern Philippines to be made a bishop.

Claver completed a masters degree in Anthropology in the Ateneo de Manila and finished his doctorate in the University of Colorado. Ordained to the priesthood on 18 June 1961, he was appointed as the bishop of what is now the Malaybalay Diocese on 18 June 1969 and was consecrated on 22 August 1969. Claver resigned in 1984, but was appointed Apostolic Vicar of the Apostolic Vicariate of Bontac-Lagawe, Philippines. He retired on 15 April 2004.

Much talk about Church renewal and change today under Pope Francis’ reform movement echoes some of Bishop Claver’s ideas articulated decades ago. In particular, he has asserted that lay people need to reform also. It is not enough for Church members to be baptized and take part in Sacraments. Laity need also to participate in leadership roles for the change that needs to happen. They are not only subjects who will be affected by change, but also key players who will effect the change.

Bishop Claver “Ikoy” was born in the province of Bontoc, Mountain Province and was one of the most influential people of the Cordilleras and courageous leader against martial law. In his activities and writings, he has emphasized the importance of a participatory Church that is necessary in carrying out the aggiornamento called for by the Second Vatican Council. For him, the Basic Ecclesial Communities (BECs) or the Basic Christian Communities (BCCs) are the primary and particular embodiment and vehicles of participation and Church renewal. He died in Manila on July 1, 2010.

“The FABC movement in this new world should go faster, especially in that the bishops and lay people begin to be really and truly Catholics who can dialogue.” – Fr. Catalino Arevalo, SJ

According to the statement issued by the first plenary assembly, “Evangelization is the carrying out of the Church’s duty of proclaiming by word and witness the Gospel of the Lord.” The assembly resolved to use dialogue as the approach to evangelization in Asia where Christians comprise only two to three percent of the population in most countries.

This thinking has persisted through the decades and infused programs and initiatives that have gained recognition from inside and outside the organization. Archbishop Thomas Menamparampil, a Salesian who served for many years in India’s troubled northeast region and currently chairs the FABC’s Office of Evangelization, is widely quoted for advocating an approach that involves “whispering the Gospel to the soul of Asia.”

FABC documents have detailed an approach to evangelization through dialogue at three levels: with a people’s culture (inculturation), with a country’s religions (interreligious dialogue), and dialogue with the poor.

The FABC has explored various visions of how to deliver the Gospel to Asia. Apart from its Central Secretariat, it addresses regional concerns in a more focused way largely through its nine offices. Each of them shines the spotlight on a particular concern: evangelization, human development, theological concerns, interreligious dialogue, social communication, education and faith formation, clergy, consecrated life, and laity and family.

Over the years, the FABC offices have organized activities addressing concerns related to the formation of basic communities, and the situation of youth and women. Last year, it conducted a seminar on climate change and produced FABC Climate Change Declaration.

“The most important fruit of the FABC so far is the gathering of all the bishops of Asia and providing them with a venue where they could share joys and problems,” Cardinal Gaudencio Rosales, the emeritus archbishop of Manila who worked with the former FABC commission on the missions, said in an Aug. 25 interview before the assembly.

FABC offices organize seminars and formation programs of various types and content, including some that are called Bishops’ Institutes. Many involve exposure trips to host countries. Cardinal Rosales quoted fellow bishops from India and Indonesia who expressed appreciation for such trips, especially those whose dioceses cover areas troubled by armed conflict. He also cited problems with clergy in areas where local Churches could use the FABC’s help. “Without the FABC, individual local Churches would find it hard to solve problems that are shared by other Churches,” he said.

The cardinal also acknowledged the help that the FABC offers in the formation of priests. “Instead of sending seminarians to Rome and other places in Europe, we were able to arrange through our contact in the FABC further studies of Asian priests and training of seminarians in the Philippines and other countries,” he pointed out.

Theologians have praised the scope and depth of theological reflection documented in FABC publications and FABC Papers. The challenge Father Felix Wilfred presented in volume 1 of the book “For All the Peoples of Asia,” remains “implementing the grand vision of the FABC.”

Change has already been “very large,” Father Arevalo observed. “I have seen the changes and I am happy with the changes. Now we have many bishops who are very much alive to the problems of the country. Before, it was always in the devotional area only. Not that that is bad. It is very good. But it is not enough anymore in the modern world,” he said. 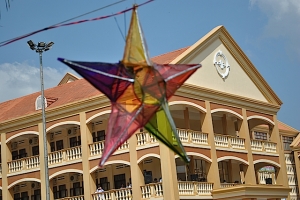 A symbol of the Star of Bethlehem hanging around Xuan Loc Pastoral Complex remind delegates and guests attending activities of the 10th Plenary Assembly of the Federation of Asian Bishops’ Conferences about the meaning of Advent, the season during which the assembly commemorating the 40th anniversary of effectivity of FABC’s Statutes and studying together challenges to the Church in Asia. (N. J. Viehland Photo) 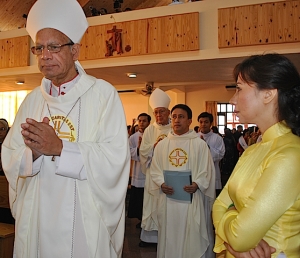 Indian Cardinal Oswald Gracias of Mumbai led the opening Eucharist for the 10th Plenary Assembly of the Federation of Asian Bishops’ Conferences (FABC) . The statutes of the voluntary association of episcopal conferences in South, Southeast, East and Central Asia was approved by the Holy See on Nov. 16, 1972. The federation has been created to foster among its members solidarity and co-responsibility for the welfare of Church and society in Asia, and to promote and defend whatever is for the greater good. Filipino Cardinal Gaudencio Rosales served as Pope Benedict XVI’s official representative to the assembly whose activities were held in Xuan Loc and Ho Chi Minh City from Dec. 10-16. (N.J. Viehland Photo)

Filipino Cardinal Gaudencio Rosales (in front), Archbishop Emeritus of Manila was welcomed by a drum and bugle corps and a reception line stretching through the main roads of Xuan Loc Pastoral Complex in the diocese east of Ho Chi Minh City on Dec. 11, 2012, after he delivered his address citing Pope Benedict XVI’s message to the 10th Plenary Assembly of the Federation of Asian Bishops’ Conferences (FABC). He is accompanied by Assistant of the Papal Legate Father Marcelino Antonio M. Maralit, Jr. (N.J. Viehland Photo)

The Grand Chapel is one of five chapels on the block of buildings in Xuan Loc Pastoral complex where Saint Joseph Seminary stands. The seminary’s introductory booklet says this chapel is built in the shape of three rice buds indicating the impending rich harvest of the Church. In front of the chapel Vietnamese Catholics, mostly from Xuan Loc diocese, lined the pastoral complex road to welcome bishops and other delegates from around Asia, the Vatican and other continents, at the opening of the 10th Plenary Assembly of the Federation of Asian Bishops’ Conference on Dec. 11, 2012. (N. J. Viehland Photo)

Xuan Loc was created in 1965 from places under the pastoral care of Ho Chi Minh City archdiocese. In 2010, more than 35 percent of the 2.34 million people living in the diocese had been baptized Catholics. Today, more than 1,700 women religious are helping in Church ministries diocesan officials say. Many of them contributed to discussions, services and operations in support of the 10th Plenary Assembly of the Federation of Asian Bishops’ Conferences Dec. 10-16, 2012. (N. J. Viehland Photo)

Participants, including Ursuline Sister Mary Walter Santer processed from the Xuan Loc diocesan offices building to the auditorium for the opening of the 10th Plenary Assembly of the Federation of the Asian Bishops’ Conferences (FABC) on Dec. 11, 2012. Sister Santer was honored at the assembly for her long-time service as Executive Secretary of the FABC Office of Consecrated Life, a post now held by Religious of the Assumption Sister Deanna Maria Villavert Combong. (N. J. Viehland photo)

On Friday, December 14, the plenary hall during the evening prayer filled with voices of hope singing:

“Waiting in silence, waiting in hope; We are your people, we long for you, Lord. God ever with us, Emmanuel, Come, Lord Jesus, Maranatha! –  “Waiting in Silence” by Carey Landry