QUEZON CITY, Philippines – Nuns of the Religious of the Good Shepherd in the Philippines are multi-tasking as their congregation’s members engaged in apostolic work grow fewer and older.

Sr. Maria Añanita Borbon, 47, for example, heads the Philippine Province’s Council for Ministry and coordinates its Ruhama Center for girls and women.

In an interview for Global Sisters’ Report (GSR) on Nov. 9, Sr. Borbon described the demands of her assignments. These have failed to overwhelm her, she says, because she has done most of the tasks she faces and past experiences left a rewarding feeling.

She also counts on learnings from studying for her Masters in Educational Administration at the Ateneo de Manila University and PhD in Educational Leadership and Management at De La Salle University. In the end, Sr. Borbon says, engaging with people, especially young students while  juggling her time between assignments often leaves her feeling “energized.”

As part of the RGS charism, Sr. Borbon felt called upon to revive a program for exploited women after its internationally recognized founder and head, Sister Mary Soledad “Sr. Sol” Perpinan, passed away in 2011. Sr Perpinan had established a network of centers helping women even after rheumatoid arthritis bound her to a wheelchair.

Women call out to people outside the nightclub where they work in Malate, Manila – contributed by Ed Gerlock edgerlock@yahoo.com.ph

The first RGS sisters who arrived in the Philippines in 1912 were Irish nuns sent by boat from Burma (Myanmar) in response to the invitation of the bishop of Lipa in Batangas Province, 51.6 miles (83 kilometers) southeast of Manila. Under RGS sisters in France, Philippines nuns ran schools and ministries in many parts of the country.

After opening a school in Batangas, the nuns established their first Good Shepherd home for endangered women and girls in Manila in 1921. They later opened homes for unwed mothers, prostituted women, battered women, slum dwellers, landless farmers, indigenous groups, overseas contract workers and their families, street children, “the most neglected and oppressed.” The Philippines province was established in 1960.

Today RGS has grown to be one of the world’s biggest congregations of women with more than 4,000 sisters serving in 73 countries in five continents. On its centennial in 2012 the Philippines Province reported it was running 27 apostolic and contemplative communities in the country. More than 140 apostolic sisters and 25 contemplative sisters were serving in the Philippines.

In 2002 there were a total of 183 Filipino apostolic and contemplative sisters, the Catholic Directory of the Philippines reported.

Read Part 1 of Q & A with Sr. Borbon published in GSR 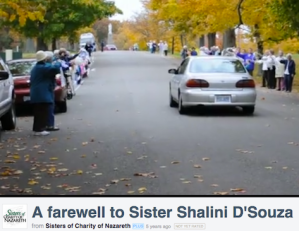 Sister Shalini D’Souza, the first Indian to head a US-based international religious congregation for women, and who once distributed condoms in Delhi’s red-light district to fight AIDS, died Thursday. She was 76.