Celebrations in Nagasaki began today to commemorate the 150th anniversary of the “Hidden Christians of Japan.” Pope Francis appointed Filipino Cardinal Orlando B. Quevedo, Archbishop of Cotabato, will serve as his Special Envoy at the anniversary event which will last until March 17th. 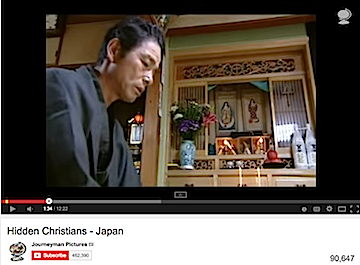 Also taking place at the Nagasaki Museum of History and Culture until April 15 is the exhibit of more than 500 items confiscated from Japanese Christians during their brutal persecution in the 19th century from the late Edo Period to the early Meiji Era, Japan Times online newspaper announced.

The Times reports that some 550 items are back in Nagasaki for the first time on display in the special exhibition “Miracles Protected by the Virgin Mary — Churches and Christian Sites in Nagasaki,” include 212 cultural properties rarely loaned out by the Tokyo National Museum at one time.

The exhibit is reportedly taking place because the central government has recommended that churches and other Christian locations in Nagasaki be listed as UNESCO World Cultural Heritage sites. It shows the history of Christianity in Japan from the introduction of the faith by Francis Xavier in 1549, to the birth of the “hidden Christians” caused by brutal crackdowns and the confession of their beliefs to a foreign priest by a small group of Japanese in 1865.

Cardinal Quevedo, first prelate on the southern Philippines Mindanao island to be created cardinal, has led the Federation of Asian Bishops’ Conferences (FABC) as Secretary General from 2005-2011. FABC is a Vatican-approved voluntary association of Catholic bishops’ conferences in Central, East, South and Southeast Asia.